You are here: Home » News

We belong to the finalists

The Oskar Patzelt Foundation for Small and Medium-sized Enterprises (SMEs) awarded the Grand Prize for the 25th time. Under the motto of 'sustainable business', this year's winners include those companies that have taken new paths towards sustainability with an entrepreneurial vision and courage and are working successfully with it. Nationwide, a total of 5,399 small and medium-sized enterprises, banks and municipalities were nominated for the competition. Of these, 758 reached the 'jury's list'.

With over 500 entrepreneurs and in the presence of numerous invited guests, the Oskar Patzelt Foundation's prize gala for the four competition regions of Lower Saxony/Bremen, North Rhine-Westphalia, Rhineland-Palatinate/Saarland and Schleswig-Holstein/Hamburg took place on Saturday, 28 September 2019 in Dusseldorf's Hotel Maritim. 11 companies received the coveted 'prizewinner statue'. In each case, the special awards of 'Municipality of the Year', 'Bank of the Year' and 'Life's Work' were awarded.

We were one of 20 companies to receive the 'Finalist' award in Dusseldorf on 28 September 2019. True to our motto "Well equipped for a clean future", we convinced the jury with our overall package of being an exemplary and very committed company in the region.

Further information about the Grand Prize for Small and Medium-sized Enterprises:
https://www.mittelstandspreis.com/

Further details of the prize awards in Dusseldorf:​​​​​​​
https://www.mittelstandspreis.com/wettbewerb/single-newsmeldung/article/pm-419-mittelstand-ist-seele-und-stolz-der-deutschen-wirtschaft/ 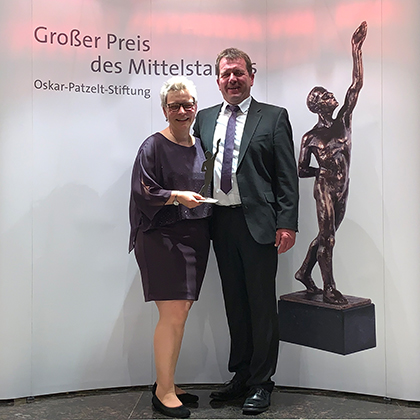 We use cookies for the purposes of personalising displayed contents of our website, analysing access to and use of our web offers, respectively, or offering functions of social media. Moreover, we pass information on your usage behaviour of our website on to our analysis or advertising partners or to partners in social media. Under certain circumstances this information may be combined with further data that you have provided or that our partners have collected within the scope of your use of said services.